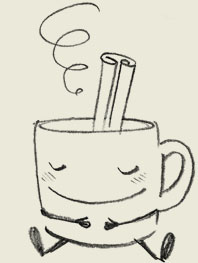 When the weather turns colder, there’s few things better than a good Hot Buttered Rum – so long as you make it with real ingredients, not the powdered mix. There’s two parts to this recipe: a batter you’ll make beforehand (then store in an airtight container in the freezer), and the simple drink mix itself.

Hot rum drinks like this were common in Colonial America, but I suspect it took Middle America to perfect it with a decadent sweet-and-spiced butter/ice cream batter. There are countless recipe variations on Hot Buttered Rum – this one comes from my mother-in-law, who used to make it in Seattle (and, by chance, this is very close to the version made at Seattle’s Zig Zag Café). Stick with a good-quality, flavorful, rum like Plantation OFTD (amazing and potent), Appleton or Hamilton Jamaican Pot Still Black – but Coruba will work, too (don’t be tempted to use a spiced rum, it’ll become a spice bomb). For the bold and adventurous, take it a level up by using Smith & Cross “Navy Strength” 114-proof Jamaican rum – all those toffee & butterscotch flavors in Smith & Cross’s beloved funky hogo really shine in this. Or dive deeper and experiment with a blend of rums – or even rum and brandy – to get your flavor just right.

In a saucepan over medium-low heat (just warm enough to melt the ice cream and butter), add together:
1 quart vanilla ice cream, softened
4 sticks unsalted butter, softened
1 lb brown sugar
2 tsp cinnamon
1 tsp nutmeg
Stir until well-blended, then pour into an airtight container and freeze. Batter will keep a long time – I have some from a year ago that’s just fine.

Pre-warm a ceramic or glass mug with boiling water while you’re assembling the ingredients. Discard the water, then combine in the mug:
1 1/2 oz dark rum
2 tbl hot buttered rum batter (leave frozen, it’ll melt as you stir)
1/2 cup boiling water (use the plastic measuring cup)
Stir to blend. Garnish with a long cinnamon stick or a dusting of freshly-grated nutmeg.