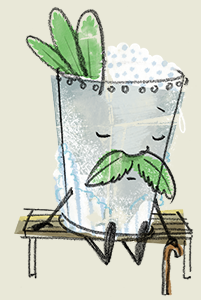 The Mint Julep: one that you’ve heard of, but maybe haven’t had properly. Most places make these with a packaged mix or mint syrup – for no good reason. Several ways exist for getting fresh mint into the whiskey, but there are masses of orthodox devotees preaching the time-honored muddling and ice-crushing technique that follows. Preparing this drink properly is a bit of a challenge and takes some skill. But you’re up for it, right?

Juleps as a style of drink go back farther than we have reliable records, as far back as 15th-century Europe, where a “julep” was a flavored sugar syrup mixed with medication. In Colonial America, mint juleps were first made with brandy, then whiskey as word got down south and stuck in Kentucky.

In an interview with Imbibe magazine, Chris McMillian, a fourth-generation bartender and local institution at New Orleans’ Kingfish, says the Mint Julep began as a wake & bake drink “in Virginia, where servants would bring them on silver salvers while you were still in bed. You would consume two to three juleps before arising, to fortify you against the malaise that was supposed to occupy the ether and make people sick.” I can’t imagine drinking three of these at any time of day, much less in the morning – our southern forebears were certainly made of stronger stuff. There’s also a great video of McMillian demonstrating his julep technique and reciting the following lovely bit of prose as he goes along. You don’t need to be as entertaining when making this for friends, but it sure wouldn’t hurt.

In the Blue Grass land there is a softer sentiment — a gentler soul. There where the wind makes waves of the wheat and scents itself with the aroma of new-mown hay, there is no contest with the world outside. On summer days when, from his throne, the great sun dictates his commands, one may look forth across broad acres where the long grass falls and rises as the winds may blow it. He can see the billowy slopes far off, each heaving as the zephyrs touch it with caressing hand. Sigh of the earth with never a sob, the wind comes to the Blue Grass. A sweet sigh, a loving one; a tender sigh, a lover’s touch, she gives the favored land. And the moon smiles at her caressing and the sun gives benediction to the lovers. Nature and earth are one — married by the wind and sun and whispering leaflets on the happy tree.

Then comes the zenith of man’s pleasure. Then comes the julep – the mint julep. Who has not tasted one has lived in vain. The honey of Hymettus brought no such solace to the soul; the nectar of the Gods is tame beside it. It is the very dream of drinks, the vision of sweet quaffings.

The Bourbon and the mint are lovers. In the same land they live, on the same food they are fostered. The mint dips infant leaf into the same stream that makes The Bourbon what it is. The corn grows in the level lands through which small streams meander. By the brook-side the mint grows. As the little wavelets pass, they glide up to kiss the feet of the growing mint, and the mint bends to salute them. Gracious and kind it is, living only for the sake of others. Like a woman’s heart it gives its sweetest aroma when bruised. Among the first to greet the spring, it comes. Beside gurgling brooks that make music in the fields, it lives and thrives. When the bluegrass begins to shoot its gentle sprays towards the sun, mint comes, and its sweetest soul drinks at the crystal brook. It is virgin then. But soon it must be married to old Bourbon. His great heart, his warmth of temperament, and that affinity which no one understands, demands the wedding.

How shall it be? Take from the cold spring some water, pure as angels are; mix it with sugar till it seems like oil. Then take a glass and crush your mint within it with a spoon – crush it around the borders of the glass and leave no place untouched. Then throw the mint away – it is the sacrifice. Fill with cracked ice the glass; pour in the quantity of Bourbon which you want. It trickles slowly through the ice. Let it have time to cool, then pour your sugared water over it. No spoon is needed; no stirring allowed – just let it stand a moment. Then around the brim place sprigs of mint, so that the one who drinks may find the taste and odor at one draft.

Then when it is made, sip it slowly. August suns are shining, the breath of the south wind is upon you. It is fragrant cold and sweet – it is seductive. No maidens kiss is tenderer or more refreshing, no maidens touch could be more passionate. Sip it and dream – it is a dream itself. No other land can give you so much sweet solace for your cares; no other liquor soothes you in melancholy days. Sip it and say there is no solace for the soul, no tonic for the body like old Bourbon whiskey.

Using a Lewis bag, crush ice to a fine, even consistency by pounding with a muddler. In an Old Fashioned glass or Julep cup, add:

Muddle lightly, gently working the mint leaves and syrup around the interior of the glass. The key here is lightly – if you bust up the leaves, they’ll release bitter chlorophyll. The flavor you want is actually in the little fibers that coat the leaves. Fill the glass or Julep cup with crushed ice about three-quarters full, then add:

Swizzle briskly to blend and chill, keeping the mint at the bottom. Mound additional crushed ice on top to form a dome. Garnish with a mint sprig that’s been lightly slapped against the dome of ice to release its aromatic oils. Serve with two straws cut to size.