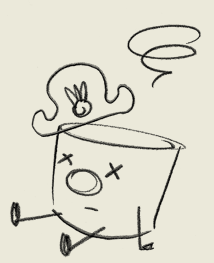 The persistant rivalry between California tiki chains Don the Beachcomber and Trader Vic’s often resulted in confusion for the customer. Both had a Mai Tai on their menu, both claimed to have invented it – and their versions were very different flavor-wise. On top of that, their Mai Tai recipes changed as the years went by, often resulting in a less-interesting drink.

A similar case with the Navy Grog – competing recipes, confusing origins, lessening quality over time. And it bears almost no relation to the “grog” consumed by British sailors, a mix of rum and water. Frank Sinatra considered the Navy Grog his favorite drink at the Palm Springs Don the Beachcomber back in the day – but this is the version the rival Trader Vic’s was serving in the ’50s. I’ve tasted both and this one’s the champ. Knockout champ, if you’re not careful!

There’s an unusual-sounding ingredient here – “Pimento Dram.” No, that’s not the red blobby things from inside an olive. Down in the West Indies, they call the Allspice tree “Pimento.” This traditional Carribean liqueur is simply allspice-infused demerara rum mixed with a brown sugar syrup. Easy and fun to make at home, so long as you can stand waiting a few weeks for it to come together.

Shake well to blend and chill, then strain into a double rocks glass filled with crushed ice (an ice cone with a straw running through it was the style at Trader Vic’s, but can be impractical for home use).

Garnish with a lime twist and grapefruit twist.

Step Two
After 10 days, strain the infused rum through cheesecloth, then a coffee filter, to remove allspice. In a saucepan over medium-low heat, combine 1 1/2 cups water with 2 1/2 cups brown sugar. Stir to blend until sugar is completely dissolved. Let brown sugar syrup cool, then add the infused rum. Funnel into an airtight glass bottle or jar and let sit 30 days in the refrigerator. This will level out the heat of the allspice. Keep refrigerated.