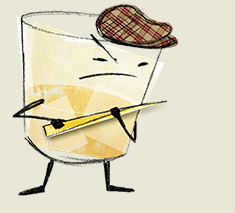 Really just a Scotch on the rocks with a bit of Drambuie, the Rusty Nail is an Atomic Age classic I’ve found even more satisfying when made along the lines of an Old Fashioned.

The natural combination of Scotch and Drambuie had been around since Prohibition, operating under a couple different names (some stupid names, too: D & S, Knucklehead, MIG-21, Little Club #1, B.I.F), until it received official christening as a “Rusty Nail” at some point in the ’50s.

I’ve seen ratios as high as half-Scotch and half-Drambuie – way too sweet. Dry it out some and round it up with lemon oil and orange bitters; you’ll want to take your time sipping it that way. The recipe below is not an “according to Hoyle” 2:1 Rusty Nail – it’s my minor spin on the drink that suits my palate.

Drambuie (from the Scottish Gaelic an dram buidheach, “the drink that satisfies”) is an herbal spiced heather-honey liqueur with a Scotch whiskey base. It was originally made exclusively by the Broadford Hotel on the Isle of Skye in the 1870s, then the recipe was sold to commercial producers in the early 20th century. Rat-Packers looking for a slightly softer impact from the blast of straight Scotch whiskey embraced the Rusty Nail as their preferred sip, most likely holding a cigarette in the same hand (keeping the other hand free for snapping fingers). Cue up some Sinatra and kick back, baby.

Using a vegetable peeler or a sharp knife, cut a strip of lemon peel to make:

Don’t include too much of the bitter white pith, if any. Holding the twist with the outside facing down over an Old Fashioned glass, pinch to express lemon oil into the glass. Reserve the twist for a garnish. Into the glass, add:

Add an ice rock or two to three ice cubes then add:

Stir briskly to blend and chill. Insert the lemon twist as a garnish.