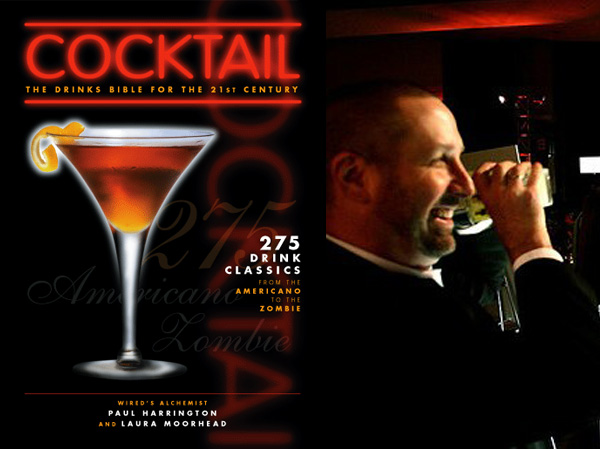 A THUMBS-UP FROM PAUL HARRINGTON

This endorsement is from a person I’m particularly proud to have on board with this project: Paul Harrington, who created the long-gone “Cocktail Time” section at Wired‘s web site back in the ’90s that eventually became the book  “Cocktail: The Drinks Bible for the 21st Century.” Through those, Paul became my virtual guru of the cocktail – from his writing, I learned all the cornerstones of drink-making, insistence on quality, the importance of measuring, the core drink styles. Then about nine years ago, I emailed Paul asking if he’d be interested in reviving his old web site with my help. I was surprised to receive a phone call back from him – he wasn’t able to do anything with the content of the site and book since Conde Nast took over Wired, but we wound up chatting for an hour about cocktails and we’ve maintained a sporadic communication since then via email and Facebook. So recently, I sent him a draft of “Home Bar Basics” and asked if he’d give me his thoughts on it – he said he’d be “honored.” He knows the honor is all mine; this is like the Apprentice returning to the Master if you ask me. Paul reviewed a draft of the book and returned a marked-up copy with all kinds of advice and ideas that helped tighten up the content.

Of the book, Paul says, “A refreshing response to the overwhelming amount of information available on cocktails. A cleverly written guide that should be in every home. Cheers.”