“Dumping” a drink is almost the same as shaking, but skips the final step of straining out the ice. This method of preparation typically uses pebble or cracked ice.

2 Measure all ingredients into the smaller “cheater” tin.

3 Add ice to the Boston tin, approximating just under the volume of your serving glass. Secure the two tins together snugly (the cheater tin will fit at a slight angle) and raise the tins to shoulder level, oriented horizontally, with the base of the cheater tin pointed behind you.

4 Shake briskly for 10 seconds, then separate the tins by squeezing or smacking the Boston tin at the point where the two meet. Return any portion of the cocktail residing in the cheater tin to the Boston tin.

5 Pour the drink, ice and all, into the glass. 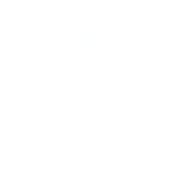 The double rocks glass holds 10 to 13 ounces and is primarily used for tropical drinks that come served with a fair amount of pebble ice.

isn’t something you can carve unless you’ve gone over to the backside of sanity… in which case you might want to skip the cocktails for a bit. There are a few resources that may be within reach: If you have a Sonic Drive-In nearby, they sell 10-pound bags of pebble ice as part of their regular menu. Some gas station mini-markets will also let you buy a plastic bag full of their “crunch ice” (same thing). Barring those venues, breaking up some ice cubes by placing them in the palm of your hand and cracking them hard with the back of a barspoon is a bit of a tedious, but effective, substitute. A mallet & Lewis bag (or rolling pin & Ziploc bag ) will pulverize your ice, but is a little harder to control size consistency.

Tropical drinks become high-style in the 1950s, flourishing with the ornate, over-the-top enthusiasm typical of the post-war era. But as the younger generation came to see the effects of the Vietnam War in real time via gutsy reporting on TV, they also began to understand the toxic side of this fantasy world in the context of the civil rights movement and the damage done to others (and ourselves) by American imperialism. The Mai Tais that Dad drank with his square friends were no longer cool. By the ’70s, what passed for tropical drinks were sugary crowd-pleasers devoid of nuance, like the Piña Colada (but delicious when made right). Unexpectedly, it took the SoCal punk scene of the ’80s and ’90s to resurrect the abandoned, uncool genre of what they started calling “tiki” — furthering its mishmash by adding rockabilly, hot rods, lounge style, and burlesque into the mix. Among those leading the revival was Jeff “Beachbum” Berry, who began appreciating, researching, and unearthing the lost recipes and ingredients of the original drinks by interviewing aging bartenders and their children... eventually striking gold by unraveling the mystery of Don the Beachcomber’s previously unknown 1934 Zombie recipe, among others. The 21st-century craft cocktail movement has come to acknowledge and start to move beyond tiki’s problematic past while embracing these astounding drinks for their compatible craft elements: quality spirits, fresh juices, and handmade syrups — but also as a fun antidote to the stiffness and orthodoxy that came with the cocktail renaissance. Beachbum Berry’s original Ancient Mariner, his superior riff on Trader Vic’s Navy Grog, counts as a “Basic” simply because I wouldn’t want to live in a world without this flavor!