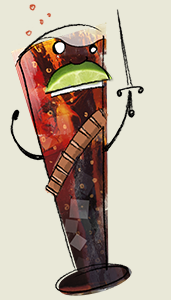 This spin on the Cuba Libre is one that can open the minds of your friends who don’t drink cocktails – except for Rum & Coke or Jack & Coke.

Coca-Cola was invented in the 1880s by John Pemberton, a pharmacist in Georgia. His product, originally called “Pemberton’s French Wine Coca,” was marketed as a patent medicine, a cure-all for various popular ailments including constipation, morphine addiction, impotence, and “extreme mental exertion.” Pretty sure its mix of Bordeaux wine, sugar, caffeine, and cocaine would put some pep in anyone’s step! Georgia enacted Prohibition laws in 1886 (trendsetters, way ahead of the national ban in 1920), so in order to keep his popular product moving, Pemberton reformulated his tonic to remove the wine, and it became even more popular.

But Coca-Cola seemed to be missing its booze, and eventually it found a natural companion in Caribbean rum. The original Cuba Libre goes back to just after the 1898 Spanish-American War in Cuba. U.S. soldiers stuck around and brought Coca-Cola with them, adding it to the typical rum and lime in an easy blend: a shot of rum, a squeeze of lime, top it off with Coke and toast with the battle cry of the day: “Free Cuba!” The Cuba Libre / Rum & Coke may be the most popular highball of all time, even inspiring a hit song in the 1940s (originally by Lord Invader, then covered by The Andrews Sisters). By this time, of course, the cocaine content in Coca-Cola had been nixed, just leaving the twin turbos of sugar and caffeine. And beginning in the ’80s, even sugar was booted in favor of the cheaper high-fructose corn syrup. Coke is still made with cane sugar in certain international markets like Mexico – read the ingredients list and look for “The Real Thing.”

Flash forward to the ’90s: Paul Harrington is working the bar at Townhouse up in Emeryville. He gets with two people from Wired magazine to launch a cocktail section on their web site (an incomplete archive by Robert Hess is here for the curious) that helps spur the current cocktail renaissance. His tweak to this tired old drink, suggested by a Venezuelan customer: Add a hit of gin and Angostura, cut back on the Coke – suddenly the high-school drink is all growed up. If you only know the standard version, you might be surprised by the magic that gin & Angostura work on the flavor: rounding down the sweetness and boosting the earthy spiciness.

Shake well to blend and chill, then strain into a Collins glass filled about two-thirds of the way up with cracked ice. Top with:

Stir lightly to blend and garnish with a lime wedge. Optionally, serve with a straw.

One Response to CUBA LIBRE (PREPARADO)