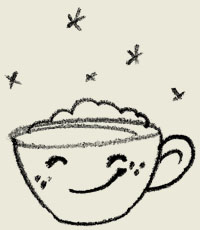 It’s one thing to stir a shot of whiskey, brandy, or rum into some store-bought egg nog. That was good enough for me until I read about this simple homemade technique on Portland bartender Jeffrey Morgenthaler’s blog. Where the commercial variety of egg nog is thick and syrupy, almost gelatinous, this do-it-yourself version is light, silky, and deliciously fattening. Give this to someone who says they hate Egg Nog and you’ll most likely have a convert.

Historically, Egg Nog can be traced to Medieval Europe, where warm or cold spiced egg drinks were spiked with wine or sherry. Rum, then whiskey, became the norm as the drink migrated to Colonial America (and George Washington liked his with rye whiskey, rum, and sherry – truly democratic).

This also work batched ahead of time in whatever volume you want and stored in the refrigerator – it’ll keep for months. All the way until next Christmas, believe it or not. Aging is perfectly safe and mellows the flavors, boosts sweetness, and makes the texture even more velvety.