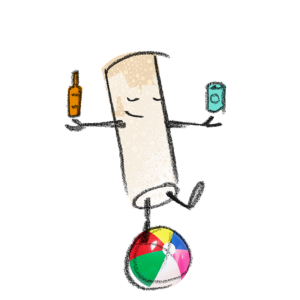 Simple doesn’t mean dumb. Two-ingredient Highballs, like any other drink, are done well when one pays attention to the details: measure your pours, use high-quality ingredients, and employ good ice. A common mistake home bartenders make is eyeballing proportions that will fill whatever glass is on hand. The usual Highball ratio is two ounces of booze with four ounces of lengthener. Ideally, you’ll have dedicated Highball glasses around 10 ounces in capacity. Resist the urge to fill a bigger glass: either add more ice or just live with the glass not being full.

The name “Highball” may have come from the Irish, who call for their drink of choice as a “ball o’ malt” — so, simply a tall serving of whiskey (“boll” is Flemish for “glass” — the Dutch brought the term to England, along with their genever, then to Ireland). As far as we can tell, the original Highball was the Scotch & Soda, mixed in the UK with the carbonated water first manufactured by J.J. Schweppe in Geneva and London. With the popularity of sodas like ginger ale, Coca-Cola, and 7-Up in the late 19th and early 20th century, the Highball in all its forms became even more varied and accessible — and still reigns as the most popular style of mixed drink.