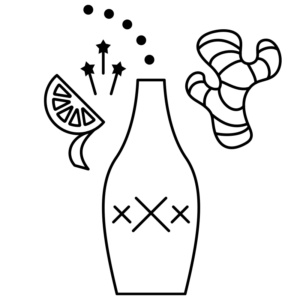 FALERNUM is a spiced rum liqueur originally from Barbados. This recipe is inspired by Paul Clarke’s “Falernum #10.” In a saucepan over medium heat, lightly toast 50 cloves, one tablespoon whole allspice berries, and one whole nutmeg (crushed, not ground). In an airtight container, combine with a cup of aged 151 Spanish-style rum, the peeled zest from 8 limes (being careful to not include any of the bitter white pith), and a half-cup of grated fresh ginger. Infuse for 24 hours, then fine-strain the infused rum to remove ingredients and small particles. Make a rich simple syrup of two cups white sugar and one cup water and let cool. In an airtight container, combine the infused rum, the rich simple syrup, and 10 drops of almond extract. Stir to combine. Let it rest two weeks, refrigerated, for the ginger to mellow. Keep refrigerated. Will last about 12 months. Shake before using.

PIMENTO DRAM, sometimes called Allspice Liqueur, is named for Pimenta dioica, the Jamaica Pepper tree. Confusing, but no relation to the cherry-pepper chiles that get stuffed into olives. To make this tiki essential, lightly toast a quarter-cup of whole dried allspice berries in a saucepan over low heat just until fragrant, then lightly crush — just enough to break them into chunks, not pulverized. In an airtight container, combine the allspice with one cup plus one ounce of aged 151 Spanish-style rum. Let the mixture steep for 10 days in a cool, dark place. Strain the infused rum through several layers of cheesecloth or a nut milk bag, then through a paper coffee filter to remove fine particles. In a saucepan over medium-low heat, combine one and a half cups of water with two and a half cups of light brown sugar. Stir to blend until sugar is completely dissolved. Let the syrup cool, then add the infused rum. Funnel into an airtight glass bottle or jar and let it rest 30 days, refrigerated, to level out the heat of the allspice. Keep refrigerated. Will last indefinitely.