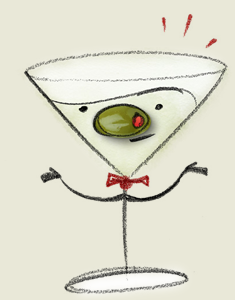 This is The One Martini, if you ask me. Beyond the really annoying Chocotini, Appletini thing. I’m talking about more subtle variations – more vermouth, less vermouth, a dash of olive brine, a dash of Scotch, blah blah. With the right ingredients, this archetypal cocktail doesn’t need anything else. The Martini has even become iconic visual shorthand for “cocktail” – check warning labels and outdoor sign icons. Ignore James Bond’s assertion about shaking Martinis, he just wanted to sound like a tough guy.

You’ll notice this recipe follows the exact template as the Manhattan, just swapping ingredients. It’s a winning combo worth tinkering with: two parts spirit, one part aperitif, two dashes of a complementary bitters. Try substituting one or more ingredients out and see what you come up with – after all, bartenders have been doing the same thing since 1870 or so!

The French (AKA dry or white) style of vermouth used here came into being about 100 years after the original Italian (AKA sweet or red) style. They’re both made with a white wine base, actually – the difference in Italian vermouth is the mix of botanicals and sugar – and the use of caramel color or (less commonly) barrel aging.

The exact origin of the Martini is a mystery that may never be solved. Some point to the East Bay, California town of Martinez (home of the similar Martinez cocktail), some suggest Italian bartenders named “Martini,” but the Occam’s Razor answer is simply this: Martini (later named Martini & Rossi) began importing their Italian vermouth to the US around 1870, with the dry French style making its stateside debut around 1900. Folks would ask for a “Martini cocktail” the same way they might ask for a “brandy cocktail” or “whiskey cocktail.” It’s possible the Martinez and Martini were the same cocktail at one time, evolving to distinguish themselves by choice of vermouth style and accent flavors. Even though more vermouth brands became available in the US over time (Cinzano, Noilly Prat, Dolin), the name Martini stuck. For a time in the 1990s, the name “Martini” came to denote any cocktail served up; Thankfully, we’re getting away from that. The venerable Martini deserves more respect than to be saddled with a reputation as frilly and foo-foo.

Add a mix of ice cubes and cracked ice to cover well above the liquid level. Stir well to blend and chill, then double-strain (to catch small bits of ice)  into the chilled glass. Pinch a lemon twist over the drink to express oils onto its surface, then lightly brush the twist around the glass exterior. Discard the twist.

Optionally, garnish with an olive pierced on a cocktail pick.