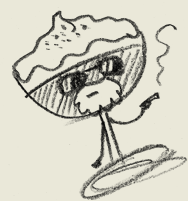 For dessert sometime, consider this impossible-to-hate variation on The Dude’s “Caucasian” – with freshly-whipped cream on top and a dusting of grated coffee bean as reimagined by Sam Ross. Yes, it’s sweet, and yes it has vodka in it. And it’s awesome. Born from the “Black Russian” cocktail out of Belgium (!!) in the late ’40s, the White Russian upped the decadence in the ’60s by adding cream. The ’60s? Decadent? Say it ain’t so!

The standard way you’ve probably seen this drink is all three ingredients slopped together over ice in a rocks glass. But here’s an idea: It’s dessert. It’s supposed to be a special treat. Kick back and feel as guilty as you want. Or not.

If you can track down the amazing House Spirits coffee liqueur or St. George Firelit, do so – it makes a difference. But Kahlúa works just fine if you come up short. And don’t substitute sweetened whipped cream – it’s sweet enough already. If you don’t have an electric mixer, a few minutes whipping the heavy cream by hand with a whisk will help offset some of these calories!

Just don’t blame me if drinking this makes you want to twist up a fatty and crank up the Floyd.

HOW TO
Chill a cocktail glass in the freezer at least ten minutes. In a standing mixer (or by hand), whip 1/4 cup of heavy cream to thicken. Stop before you get to soft peaks – the cream should be thick but still pourable.

Stir well to blend and chill, then strain into the chilled glass. Leave room in the glass for cream. Gently pour just enough whipped cream to top off – distribute and level the cream with the barspoon. Using a microplane, grate a coffee bean in the center of the cream to garnish.

Licking the glass clean at the end is perfectly acceptable, don’t be ashamed.